Herman and Katherine (Batke) Fredrick and Arthur and Mary (Batke) Engler are buried here.  Both sets of graves are in the Garden of Devotion section behind a beautifully crafted stone Bible monument.

Funeral services will be held at 10:30 a.m. Friday in Trinity Lutheran church.  Burial will be in North Shore Memory Gardens.  Memorials may be made to the church.  Friends may call at the Front funeral home, Benton Harbor. 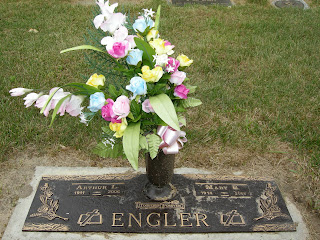 Services will be held 10 a.m. Tuesday at Dey-Florin Chapel, Florin Funeral Services, St. Joseph, where visitation will be Monday from 5 to 8 p.m.  Burial will be in North Shore Memory Gardens.  Memorial donations in memory of Mr. Engler may be made to Grace Evangelical Lutheran Church of St. Joseph.

Mr. Engler was born May 1, 1911, in Stevensville to Lorenz and Louise (Heyn) Engler.  He retired in 1976 after 26 years of service as a security guard for Whirlpool Corporation.  He was also a member of Grace Evangelical Lutheran Church of St. Joseph.

Survivors include his wife of 71 years, Mary (Batke), whom he married June 22, 1935, in St. Joseph; one daughter, Elaine Bush of St. Joseph; one son, Kenneth (Nok) Engler of Woodbridge, Va., and one brother charles Engler of St. Joseph.  Also surviving are five grand-children and three great-grand-children.  He was proceeded in death by a son, Charles Engler; five brothers and one sister.