In 1921, the Links and the Batkes traveled from Canada to Alabama for a better life.  Background on this move can be read in the posting: "Why did the Batkes go to Yellow Pine, Alabama? 1921"

Recently (November 2, 2010), Dee Milbocker [granddaughter of Jacob and Maria Link] shared with Don Fredrick two photos believed to be from the time the Batkes and Links were in Yellow Pine, Alabama.   Dee notes that Sharon Byron Lampros, Bonnie Link Fago, Franklin Byron and she feel fairly certain about the identity of Jacob and Maria Link in the photo.  She states the woman in the picture has sloping shoulders just like her grandmother and mother.  The man is wearing a hat very much like the hat Jacob is wearing in another picture of Maria and Jacob taken in St. Joe, MI.  The source of the photos are from her Uncle Ray, son of Jacob and Maria, via Bonnie Link Fago, which adds additional rational to the "who and where" of the photos.

In the note to Don Fredrick, Dee asks the questions: "We wonder if the man in the center could be your grandfather [Henry Batke].  What do you think?  Any idea who the little boy sitting on the stump could be?" 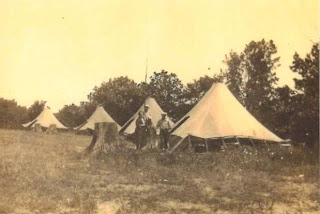 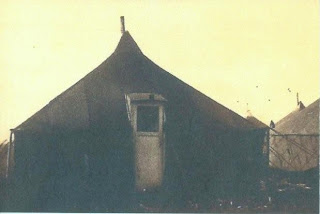 Don Fredrick responded to Dee with the following note:

"The whole story, as far as it goes, impacts us directly, our generation.  But the effect, perhaps in a lesser way is important for the generation that follows ours.  Origins mean something!  Origins mean a great deal when we realize that our ancestors had to face all of this to migrate to America and what it meant already in the early part of the last century as a result of the kind of culture developed by those already here.  Our kids need to know.  Their families need to hear the story that is so importantly told by both of you and now potentially will be repeated on the Batke blog even though there may be some uncertainty about who the characters are in the pictures.  Your history makes these pictures especially meaningful to you and yes, even the Batkes.  Thanks to you Dee and Bonnie."
Don

Don Fredrick also noted "Grandma Fredrick [daughter of Henry and Katherine Batke] certainly alluded to but never did describe the housing they endured in Alabama before they came North to Michigan.