Selma Batke, daughter of Henry and Katherine Batke, married Olen Smith.  Both are buried at the Oak Ridge Cemetery.

The new Oak Ridge Cemetery on Front Street, originally 10 acres, was purchased from Warner Hamilton in 1864 for $500, to replace the first known cemetery in Buchanan, "The Old Burying Ground."  The first burials were made in 1867.  Records show that bodies were moved from "The Old Burying Ground" cemetery in Buchanan, to Oak Ridge as late as 1898. 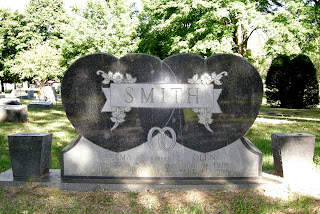 Olen and Selma Batke Smith are both buried at Oak Ridge Cemetery.

However, there are other documents, including Henry Batke's Declaration of Intention to become an American Citizen, that states Selma's birth year was 1918.

The funeral was held at 10:30 a.m. Monday at Swem Funeral Home, Buchanan.  Memorials may be made to the City of Buchanan for the Buchanan Commons or Buchanan High School Athletic Department.
Mr. Smith was born June 9, 1918, in Virginia.  He retired as the independent owner and operator of Reclamation Oil Fields after 38 years.  He was a navy veteran of World War II.

Survivors include: two daughters -- Judy Maxwell of Roanoke Rapids, North Carolina, and Cheryl Richeson of Decatur, Alabama; a son Roger Smith of Coloma, Michigan; three step daughters -- Polly Koenegsknect of West Bloomfield, Michigan; Christine Gardner of Noblesville, Indiana, and Linda Morrer of Charlotte, North Carolina; a stepson, John Donley of St. Joseph, Michigan; nine grandchildren; and one great-grandchild.  He was preceded in death by his first wife, the former Selma Batke, in October 1940 (sic) and by his second wife, the former Agnes Donley, in 1981.